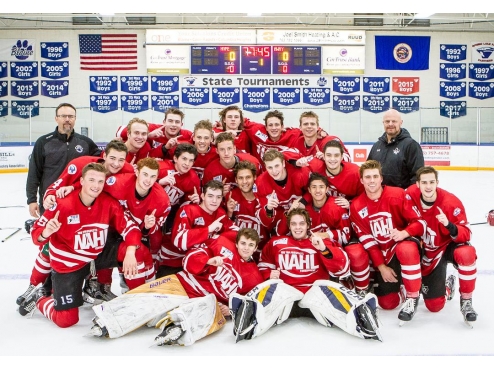 This past weekend, the Tier 1 Elite League All-Star West team was crowned tournament champion at the North American Hockey League Top Prospect Tournament! The tournament was held at Fogerty Ice Arena in Blaine, Minnesota as part of the NAHL Robertson Cup Finals, where scouts and spectators alike were there to witness a weekend of great hockey. T1EHL sent two All-Star teams with the West coming out on top.

T1EHL West had a strong start, beating the AYHL team 9-1 in the first game. Game 2 was a defensive affair, as T1EHL West limited the MN Seniors team to one goal in a 2-1 decision. Game 3 against NAPHL East went to overtime. Ryan Reid of the Phoenix Jr. Coyotes scored the game winner in a 3-2 final, giving the T1EHL West the pool and a spot in the final.

The final game of the Top Prospects Tournament was played at the same time as the Robertson Cup finals, and featured the two undefeated pool champs: T1EHL West and NAPHL West. The game was another hard-fought, defensive battle in which T1EHL West emerged as the 2-1 victor.  Both T1EHL West goalies, Mattias Sholl of the LA Jr. Kings and Will Oliver of the St. Louis AAA Blues, stood on their heads in this one as they had for much of the tournament.

Overall, the T1EHL All-Star West team had a great weekend, allowing only 5 goals while pacing the tournament in shots for. Congratulations on your victory! We can't wait to see where you will go from here!